Bonnie, the Claymore of the night

Bonnie, the Claymore of the night

The restless dead stalk the moors and the northern lowlands. Leaden clouds have ensured that sunlight is rare and many have fled south to escape the biting cold and the wandering hordes of the undead and the rumors of even worse creatures that lurk in the night.

There are some who stayed to fight, and none fought more fiercely than Bonnie. Once known as the Claymore of the North, she fell in defense of her people and was long believed dead. Although the sighting stories of her have begun to spread, it is not like before. The townspeople speak of a red-eyed, fanged being of incarnate rage striking the undead in the dead of night, wearing familiar dark leather armor and wielding a claymore that glows like obsidian. No one can say for sure, but they insist that Bonnie has returned and is now known as the Claymore of the night. 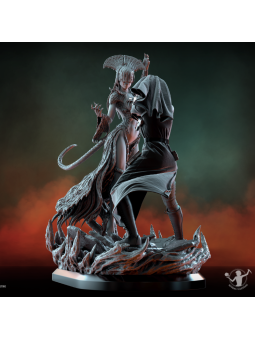